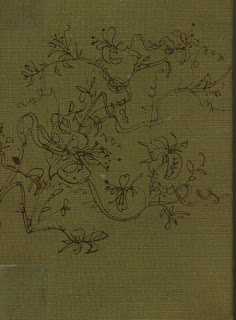 
I've tried to read this book three or four times and always give up. It just doesn't appeal to me, and then I wonder what's wrong with me. So many of my bookish friends have high praise

I watched two of the movies or TV miniseries. The earlier one with Alistair Sim in 1971 with C, and we left in the middle of it. We giggled and laughed about it for years after, and called it the Pig Movie. She said she'd never let me choose another movie. Later I watched the 1996 version with Kate Beckinsale and Stephen Fry - same result, gave up part way through.

I borrowed the book from the library several times because this 1971 edition is so beautiful. The cover is dark green cloth with a design of vines and leaves. The water colour illustrations by Quentin Blake are quite gorgeous, fascinating and funny. 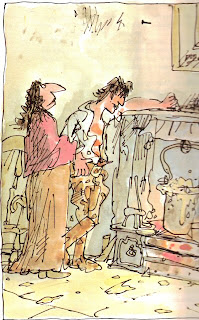 Here, Seth has been left to tend the breakfast meal.

In the large kitchen, which occupied most of the middle of the house, a sullen fire burned, the smoke of which wavered up the blackened walls and over the deal table, darkened by age and dirt, which was roughly set for a meal. A snood full of coars porridge hung over the fire, and standing with one arm resting upon the high mantel, looking moodily down into the heaving contents of the snood, was a tall young man whose riding-boots were splashed with mud to the thigh, and whose coarse linen shirt was open to his waist. The firelight lit up his diaphragm muscles as they heaved slowly in rough rhythm with the porridge. 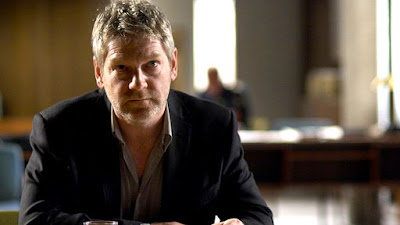 Wallander's First Case is the first of five short stories in Henning Mankell's The Pyramid. I came to read this book (my first by Mankell) after watching the PBS miniseries starring Kenneth Branagh that Nan at Hill Farm reviewed on her blog. You can listen to a fantastic interview with Henning Mankell in Toronto.

These five short mysteries take us back to the beginning and trace chronologically Wallander's growth from a rookie cop into a young father and then a middle-aged divorce.

In 1969, Kurt Wallander was twenty-one years of age, a young policeman, barely an adult, on his first homicide case. His next-door neighbor is dead, seemingly by his own hand. He is still a uniformed police officer in Malmo, tired of walking the streets. With a transfer to Criminal Investigation pending, his future boss encourages his involvement in the investigation. Once involved in a case, he can’t let go until he finds the answer. In this, his first case, he even calls in sick to do more investigating.

There are two problems in his personal life - one with Mona, his girlfriend who is impatient with the interference of his work. And he has issues with his father, an artist who painted the same landscape over and over. The elder Wallander strongly disapproves of his son's decision to join the police force, and frequently derides him for it.

His father has bought a house in Loderup and is moving after 19 years in this house where Wallander had grown up. Anxious that his childhood home was going to be torn down, he thought, "I am sentimental. Perhaps that's why I like opera. The questions is, can you be a good police officer if you have a tendency toward sentimentality?"

So now I've watched two episodes of the PBS series and look forward to the third next week. Apparently there is another series planned as well.
Posted by Janice at 8:57 AM 2 comments: 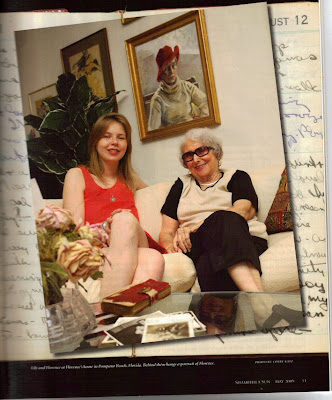 In the May 2009 issue of Shambhala Sun, Lily Koppel writes about her meetings with the author of the diary, Florence Wolfson Howitt. They first met at Florence's home in Connecticut and later in Florida.

Lily discovered the diary in a dumpster in Manhattan in 2003. The journal painted a picture of 1930's New York - horseback riding in Central Park, summer excursions to the Catskills, and an obsession with a famous avant-garde actress, Eva Le Gallienne. Florence began writing the day she received the diary on her fourteenth birthday in 1929. Its nearly 2,000 entries, written in ink that is now faded, captured the passions and ambitions of an intensely creative young woman.

I first wrote about this book on January 6, 2009. At that time I expressed my uncertainty as to the truth of the story. So here now is another look at Lily and Florence. There is a terrific audio interview with Lily and Rod Meade Sperry, one of the magazine's editors, here

I found the connection to Buddhism a bit labored, but interesting. Now I intend to go back and finish reading the diary. I gave up on it about two-thirds of the way through.
Posted by Janice at 10:20 AM No comments:

The House of Dolls

“Amy Doll, are you telling me that all those old girls upstairs are tarts?”

“Well, not exactly tarts, Doris, but they have gentlemen friends who pay them.”

Trouble is brewing at Amy Doll’s rooming house. Her four ‘golden girl’ boarders, near retirement, have embarked upon a new profession. Well, new to them anyway. In order to supplement their income, the four women traded in their girdles and afternoon tea for tight pants and drink, and began to dabble in the world’s oldest profession. Amy is timid and young and recently widowed, and now a reluctant ‘madam’.

Bertha Jago (she called herself Berti) is a woman of sixty-four, exceptionally tall and bamboo thin, appearing to have no hips, bottom or breasts

Evelyn Hunter-Smith is a country rector’s daughter (with blue-rinsed hair) and inclined to be a poor man’s edition of Berti. They had a similar build except that Evelyn was not quite as tall and she had a bust, which she considered her best feature. Both were addicted to tight trousers and drink and both had cropped heads

The Senora, as they called her, was in fact a senorita, in spite of her matronly figure. Augustina Puig had been living in the Dolls’ house for over eight years. Amy had never inquired what this magnificent Spanish woman was doing in a Walham Green horse meat shop or wondered who she came to leave her country. Her husband had brought her home one evening when he was engaged in decorating the horsemeat shop. “She’d fit nicely into the big room at the top,’ he said, ‘and the money she brings will pay for Hetty’s schooling.

This book is quite delightful – one long chuckle from beginning to end. Occasionally a great guffaw.

“Berti skimmed in, kissing the Greek on both cheeks, and spun round like a top in front of Ivy and Evelyn. She appeared to have a pair of dehydrated moths on her eyes. ‘Do you like them, dears? False eyelashes. I found them at the back of one of the drawers, must be at least ten years old, but very alluring.’ She fluttered the dehydrated moths over her almost-closed eyes.

“’ Can you see with them?’ Ivy asked bleakly. ‘Not very well, but as long as I can see my drink, that’s all that matters.’ Evelyn was still staring. ‘How have you fixed them?’ she enquired. ‘Actually with glue. There wasn’t anything else. It stings a bit. Do you think they look all right?’ 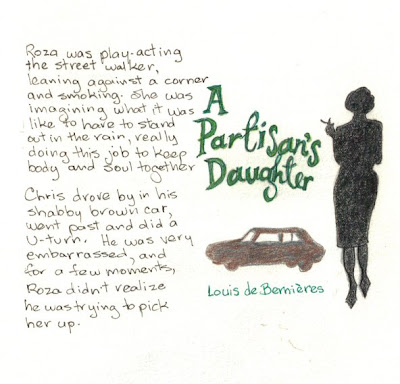 This is the story of Christopher and Roza. Christopher is a bored pharmaceutical salesman in London who suddenly decides to do something different. He is plagued with a wife at home who has become indifferent to him and to the world. He refers to her as, “a great loaf of white bread.” Roza is a Yugoslavian refugee whose father was a partisan during the war, and decides that it might be fun to dress up like a street walker and see what happens.

This is London in the early 1970s. Chris is a man in classic midlife crisis. His marriage is loveless, and his salesman job more or less meaningless. When Chris meets Roza, a woman he mistakes for a prostitute, he falls into a kind of obsession that sees him returning again and again to listen to stories from her past that she uses to keep him coming back. Thus starts a non-sexual relationship that is akin to the story of Scherezade. They meet regularly and Chris becomes more and more enamoured with her.
Posted by Janice at 9:00 AM No comments:

9 August 1945, Nagasaki, Hiroko Tanaka steps out onto her veranda, taking in the view of the terraced slopes leading up to the sky. Wrapped in a kimono with three black cranes swooping across the back, she is twenty-one and in love with the man she is to marry, Konrad Weiss.

In a split second, the world turns white. In the next, it explodes with the sound of fire and the horror of realisation. In the numbing aftermath of a bomb that obliterates everything she has known, all that remains are the bird-shaped burns on her back, an indelible reminder of the world she has lost.

This wonderful story follows Hiroko from Nagasaki to Delhi to Pakistan and Afghanistan, and finally to New York and back to Afghanistan in the wake of 9/11. Salman Rushdie said of Kamila Shamsie, "a writer of immense ambition and strength."

This book came to me as a winner of the book draw given by Lynne at DoveGreyReader, where you can find a full review. Thank you so much Lynne and to Bloomsbury as well.
Posted by Janice at 2:27 PM 1 comment: