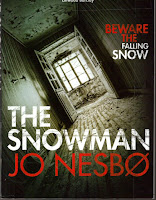 
Another compelling Scandinavian crime novel - this one takes place in Norway. For me, Jo Nesbo has replaced Henning Mankell, and I intend to read more of his books.

In 1980, a young child is made to wait in the car for his Mother as she says she needs to pop into someones house for 10 minutes. When the Mother returns to the car 40 minutes later (scared, as she is sure that she saw someones face at the window) she finds her child in a state of fear and confusion saying that he “had seen him”. When his mother asks who, he can only reply “The Snowman”.

Twenty-four years later, Oslo Detective Harry Hole is investigating the disappearance of several women who all share the fact of being married with at least one child. He is assigned a new partner, the very pretty but aloof Katrine Bratt, and the two of them set about trying to find the connection between the women who have disappeared and the only thing that seems to connect them all is that there is a snowman at the scene of every disappearance and the women have all vanished every year on the first day of snowfall. Not only that, but Harry feels he is being watched. He received a mysterious note claiming to be from The Snowman and inviting him to find out who he is. Harry and Katrine then find out that a Detective in Bergen, who also appears to have been investigating the case, disappeared 14 years ago and has never been seen since.

As Harry Hole starts to fit all the pieces together, it is clear that there is more to the case than meets the eye. With a smattering of red herrings and mistaken identities you start to suspect everyone who graces the pages of this book. There is, of course, the obligatory nail-biting climax to the book when everything comes together all at once, and the old race-against-the-clock, will he / won’t he make it in time. I love that though; the edge-of-your-seat stuff.

Details of the murders are really quite gruesome. I had to take a break often, but the story won't let me get too far away, and I'm back again soon.

This is the seventh book about Harry Hole. The red herrings, the false roads which all do connect, in a way, just not the way the police want them to, are an amazing road to follow. Twist after turn will have you gasping as they go after who they think is the killer only to find they have suspicions of someone else ... more than once. I really can't convey how cleverly this plot was woven together, with a myriad of clues, characters and evidence Nesbo doesn't miss a step in seamlessly creating an airtight thriller.
Posted by Janice at 12:02 PM No comments:

The Girl She Used to Be


How do you know who you are if you can't reveal who you've been?


Though I have been on this earth for twenty-six years, the last twenty have been one long string of boredom knotted by a few moments of unimaginable terror.

Melody hasn't been Melody since she was six years old, when her family witnesses a mob hit, and the Feds come to take them away and put them into the Federal Witness Protection Program. She's had to learn new names, new towns, new histories, new job skills. Every time she moves, she has to be someone new. The very family who they were supposedly being protected from assassinated her parents twelve years into the program.

I’ve always wondered about the witness protection program, and I often thought about what happens if you are found? I had no idea how much I would enjoy this book. I had no idea about the other aspects of being in the Witness Protection Program. What kind of life do you really have? Can it be a life at all when you cannot be the person you once were? How is a child impacted by being in this program?

This story is a must read. It is compelling and heart wrenching. I had no idea how Cristofano would end the story, but I was crying buckets by the time it was over. The tears were for me rather than for the story - remembering my homelessness and lack of family, moving from place to place looking for one.
Posted by Janice at 5:35 PM 2 comments: