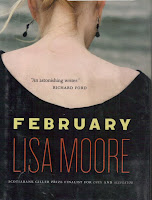 nominated for the
Scotiabank Giller Prize


In her external life, Helen O'Mara cleans and does yoga and looks after her grandchildren and shakes hands with solitude. In her internal life, she continually revisits Cal, who drowned when in 1982 the oil rig Ocean Ranger sank off the coast of Newfoundland during a Valentine's Day storm.

Helen watches as the man touches the skate blade to the sharpener.  There is a stainless steel cone to catch the spray of orange sparks that fly up

It took me right back to my childhood in Toronto where we skated every day after school until dark. I could smell the wet mitts and soggy socks in the tuck shop.

And then on the second page she let her grandson take a quarter to buy a jawbreaker - his mother will be furious. Timmy doesn't eat his vegetables - he lives on macaroni and cheese. They have rules - Helen's daughters all have rules. This sentence grabbed me by the heart and wouldn't let go

The fate of the world can hang on a jawbreaker


Hattie has just been dumped by her Paris boyfriend, her sister Min is going through a particularly dark period, and Min's two kids are not talking or talking way too much.

Hattie returns home to Canada after receiving an SOS call from eleven-year-old Thebes that Min is on the way to a psychiatric ward. She quickly realizes that she is way out of her league and hatches a hare-brained plan to find the kids' long-lost father. They hit the road and head south.

Who wouldn't want to go on a road trip with Miriam Toews?


This is another top notch delight in an increasingly brilliant career. The best thing about MT's writing is that it manages to be both cool and heartbreakingly sweet. The dialogue is the best thing out of Canada since the movie "Highway 61" and the characters are complex and deeply felt. I am going to marry this book. We will be registered at Macy's
Posted by Janice at 10:26 AM 1 comment:

The Bark of the Dogwood This book sat on the bedside table for many months before I finally started to read it. I thought it was about trees and landscaping and architecture and heritage buildings. I bought it because the cover was beautiful and the reference to "dogwood" appealed because that's our provincial flower. In April, our towns and cities and villages have masses of dogwood trees in bloom.


The subtitle was misleading ... I wonder if that was intentional? This is a series of stories written by a transplanted Southerner now living in New York. Writing an article for a magazine assignment, he returns to his roots and examines such delicate topics as race, sexual orientation, family dysfunction, mid-life crisis. He remembers things in his not-too-distant past and especially the most horrific event in his life that had been obscured until now.


I'm re-reading this now because I bought a book about a house this morning. One reviewer compared it to this one. It's hard to put down .... lots of funny bits, humor and horror ... one reviewer said, "not for the faint-hearted".
Posted by Janice at 9:04 PM 1 comment: