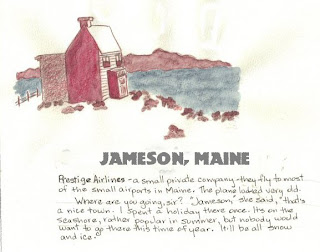 I first read Van de Wetering’s books many years ago. He is a former Zen monk and wrote two books about his experiences, first as a novice monk in a Japanese Zen Buddhist monastery The Empty Mirror and again in an American Zen community in New England. A Glimpse of Nothingness. And now, this year, I’ve discovered from a friend that he wrote many mystery novels – the Amsterdam cop series is probably most famous. He volunteered for the Amsterdam Reserve Police, doing uniform duty as a constable, later constable-first-class, and passing sergeant and inspector exams

Het Werkbezoek ("The Working Visit," published as The Maine Massacre), which in its French translation won the Grand Prix Policier, brings the commissaris and de Gier (police officers from Amsterdam) to the Maine woods in winter, where they solve a series of murders and along the way encounter a very intellectual gang of young nihilists and a rich hermit. They find a town full of suspects and a series of shady real estate deals seemingly connected to the death of the commissaris' brother-in-law. He has traveled to assist his sister in the settlement of her affairs so that she might return to her homeland in the Netherlands. Sergeant de Gier, worried about the old man's failing health, follows - on the pretext of studying American police methods.

Possibly because so much of his own life and personality went into his main character, van de Wetering failed to give him a name. In novel after novel he just appears as “de Commissaris”, the Inspector. The inspector’s two underlings, Grijpstra and de Gier, lent their names to about 15 of his novels.

The book is interesting because the characters are real; this one gives a peculiarly Dutch perspective on American culture, which at times is laugh-out-loud funny, like de Gier, in his eternally curious cop mode, wondering why on earth anyone would buy bags of ice.

His background in Zen philosophy really shows, as here where he describes Fox’s answer to a question about “the hermit”.

Jeremy is my local sage. I used to go over to the island and I would ask him questions, but he never answered. He would talk about other things instead, different things altogether. Tell me stories, jokes, anything. But he never seemed to hear what I asked. Then later, maybe the next day, I would think about what he had said and find that he had answered. Very funny, and annoying too. He plays around, and very seriously, once you get a feeling as to what he is doing. But go ahead, you can ask me questions now. I may want to try to imitate Jeremy’s method, but I won’t be as good at it as he is.

Coincidentally, while I was reading this, steeped in the icy cold Maine winter, we watched that old movie Cider House Rules, one of my many favorites of John Irving. And I’ve always remembered the line that Michael Caine says each night, “good night you princes of Maine and you kings of New England.”
Posted by Janice at 11:12 AM No comments: