Hypocrite in a Pouffy White Dress 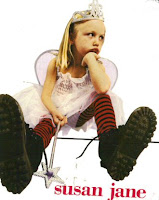 Tales of Growing up Groovy and Clueless

"When I was little, I was so girlie and ambitious, I was practically a drag queen." An uncool white kid in a tough Puerto Rican neighborhood twirling around in her tutu.

So begins this collection of Gilman's stories about struggling to get a life and a clue, and engaging in some spectaculary demented behavior along the way.

Her parents were hippies but all she wanted to do was wear a tutu- and she did- to school!!

” I was the child who bragged and lied in Show and Tell to distinguish myself from the hordes of crying and pee-crazy 5-year-olds in Kindergarten. I admit I lied not to be difficult but to be special. I conjured and fantasized on what I wanted to be when I grow up. I wanted to be a doctor, a ballerina, a social worker, a fireman and a nun. All the while feigning nonchalance when the girls in my class also had grander ambitions. I even firmly believed that we’d all be riding flying saucers by the year 2000 just like in the Jetsons.”

Susan Jane Gilman was raised in Upper West Manhattan in the 1970’s, before it became gentrified. Her family was pretty laid back and “groovy” - her grandmother claimed to be a Communist and her mother signed the whole family up for Transcendental Meditation. Throughout it all, Susie retained an active imagination and developed a sense of humor. Her family motto was, “Reality is for people with no imagination.” This is her memoir. It starts in her pre-school years and ends when she moved to Geneva shortly after her marriage

When I saw the little blond scowling girl dressed in a tutu, tiara, fairy wings, striped stockings, and combat boots (and of course carrying a “magic” star wand) I was hooked

Frank McCourt said, 'thank you, O Lord, for sending us Susan Gilman's tales', and Laurie Notaro said, "If you don't absolutely love this book, you are simply dead inside." A bit extreme maybe, but then Laurie was always extreme. I didn’t absolutely love this book, but it was a good read, amusing, and often laugh-out-loud funny.
Posted by Janice at 12:46 PM No comments: 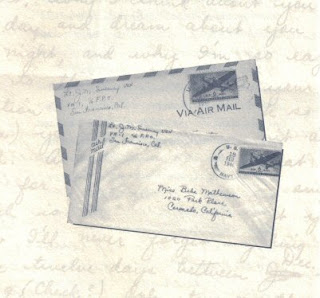 Funny how this book just jumped off the shelf at me. I was walking out of the library, and there it was on the ‘staff picks’ shelf. The name “Jack” caught me because he was a lost love from long ago.

And after I’d just finished reading The Shoebox Bible. Here comes another story of remembrance found on pieces of paper.

This is a beautiful and sweet biography about the author's father whom she never got to meet. Her mother and father met at the end of World War II and got married when he returned home. Over the next ten years, they had four sons, and the author's mother was pregnant with a daughter when his plane was lost at sea. After her mother died, she found a bunch of love letters written to her from her father and this is how she finally got to know him.

Emma Sweeney, the author, was that daughter. She is now a New York literary agent and gardening book author. In the last chapter, she writes:

My father met my mother at the tail end of a year and a half spent in navy flight training at the base near Coronado, California, where she lived. The year was 1945. They had known each other for only eleven days when he left with his flight squadron to report to Hawaii as part of the military's effort to stabilize the Pacific after World War II. Over a period of seven months, he wrote the forty-five letters I found in her drawer.

Pat Conroy, author of Beach Music and Prince of Tides, said, "As Always, Jack is one of the great loves stories of our time. By the time I finished reading these letters, Jack Sweeney had taught me much about humor and longing and almost everything about love."
Posted by Janice at 4:30 PM 1 comment: 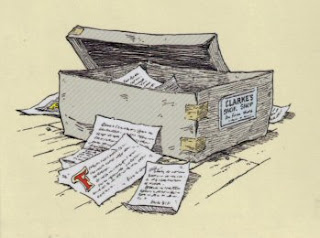 "To all mothers everywhere - and especially mine"


On the floor of her bedroom, he played on rainy days, grating toy cars and trucks endlessly back and forth across the patterned linoleum; beneath her dresser, the fire hall; under her bed, the police station and the hoosegow; and in her closet, the service station and garage, Free air.

It was here he found a well-worn cardboard shoebox beneath a floorboard. "It was an ordinary large, square shoebox - one that might originally have contained galoshes. On one end was a label printed in blue script:"

Clarke's Shoe Shop - for Finer Footwear
King Street, Phone 536W
It was a cold, dark winter day during the Second World War. Inside the box he found cigarette packages, soup can labels, handbills, calendars, paper bags, pie boxes – any scrap of paper upon which his mother could copy out snippets of Scripture.

His father left to join the Royal Canadian Air Force, and he grew up in a small southern Ontario town with his mother and two sisters and Jeremiah, his pet turtle that lived in a galvanized washtub.

In the early part of the book, I skipped past the long and tedious quotations from the Bible, but there were many snippets of happy memory from my own childhood growing up in southern Ontario about the same time. Cellars (we call them basements here), galoshes, Eaton's and Simpson's mail-order catalogs, scraping curly shavings of frost from the window, Sweet Caporal cigarette packs.

There are many photographs throughout and wonderful pen-and-ink sketches by Bill Slavin. It’s a beautiful and loving memoir, dedicated to his mother
Posted by Janice at 1:26 PM 1 comment: