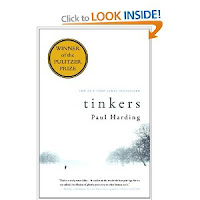 George Washington Crosbylies dying of cancer in his living room while his family keeps watch. His death provides the framework for the real story, which is about his unsteady relationship with Howard, his father.

At times George is lucid, recalling notable incidents of triumph and tragedy from his life as clearly as a newspaper reporter. Often, though, he slips into prose poems that seem to have little bearing on the story but perfectly reflect the semi-dreaming state of his mind.

"When his grandchildren had been little, they had asked if they could hide inside the clock. Now he wanted to gather them and open himself up, and hide them among his ribs and faintly ticking heart."

This novel touched me deeply because it brought up the memories of my uneasy love/hate relationship with my own father. As I move more and more toward the end of my life, I reflect often on the past - my place in it and my family relationships. They seem so incredibly important now, and earlier not given the smallest thought.